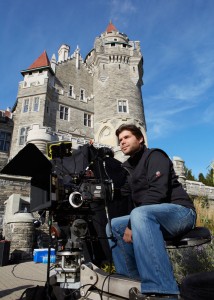 Born and bred in New York City, Gregg Simon began his filmmaking career shortly after graduating from The University of Rochester, directing and producing THE FINAL RESOLUTION. This award-winning short film explored the moral complexities of vengeance and forgiveness, as it follows a Holocaust survivor who, while riding a train, shockingly sees and confronts, a Nazi war criminal from the concentration camp he was imprisoned at. The film screened at over 15 international film festivals, and was inspired by Gregg’s best friend’s grandfather.

The success of that film led to Gregg being selected by Shoot Magazine for their NEXT GENERATION: NEW DIRECTORS SHOWCASE. That honor assisted him in securing multiple directing assignments, specifically in commercials, for clients: Discovery Channel, DTC (DeBeers), and Optimum Lightpath.

Gregg parlayed his momentum in directing commercials into helming music videos, and promos, for major record labels including: EMI Music, Virgin Records, Razor & Tie Entertainment, and PCMG/5050 Music Group. His unique vision led to Music Video Wire recognizing and honoring Gregg as one of its MUSIC VIDEO DIRECTORS ON THE RISE. This led to him to being approached by Panasonic to direct a music video for Three Graces, a female pop group signed to Universal Music Group. It was on that project that Gregg was honored to pioneer the testing-and-use of Panasonic’s first 35mm high-definition camera system, providing feedback to the company, prior to it being brought to market.

Gregg relocated to Los Angeles in 2007, where his past accomplishments led to opportunities for him to direct television, beginning on 2nd Unit, for both pilots and established series including: HOUSE M.D. (Fox), PAST LIFE (Fox), THE CAPE (NBC), HEMLOCK GROVE (Netflix), and SWAMP THING (DC Universe).

In 2015, Gregg was offered the opportunity to direct his first full-length episode of television on Season 2 of DOMINION (Syfy), filmed on-location in Cape Town, South Africa. His episode was highly regarded by the producers, and studio: “as being extremely cinematic, well conceived, and visually distinctive,” and they offered Gregg an additional budget to restore an extended director’s cut of his episode, in prep for the release of the series’ DVD/Blu-Ray box-set. Following his success on that show, the studio approached him to direct an episode of BLOOD DRIVE (Syfy). After directing episodes for cable, Gregg landed his first opportunity, in 2017, to direct for network television, where he helmed an episode for Fox’s hit police-drama series, ROSEWOOD.

Gregg recently wrapped production on episode #204 of ALL AMERICAN (The CW / Netflix), and he is currently in development on various feature films and television programs, and has recently set up projects, as a writer/director, with Impossible Dream’s Shaun Redick (Get Out, BlacKkKlansman) and Broken Road Productions’ Sean Robins & Todd Garner (Mortal Kombat 2021, Tag).

Gregg is a member of the DGA, and he has been selected for the 2019-2020 DGA DDI Episodic Television Mentorship Program, where he has been paired with EP/Director Mark Tinker as his mentor. Gregg has also served as a guest-instructor at The New York Film Academy, instructing aspiring directors, and he is an HOA Board Member, and past-President, of the Home Owners Association for The Lofts at Hollywood & Vine, a historic landmark building located in the heart of Hollywood.